This idea came about after I had gotten the Minimalist Tarot and when I discovered that it was eerily similar to another minimalistic tarot I have, namely the Dreslyn Tarot. At first this was a real bummer, but then I thought about the possibilities as to how I could reverse engineer this… That’s when it hit:

Of course, it was so simple and so obvious! All I had to do was go all punk rock DIY witchcraft on this thing, and problem solved!

I’ve done plenty of tarot deck modifications before, but never anything beyond edging and trimming really, so this was a little scary. But I decided to be brave and just grab a black permanent marker and go to town.

Now, I don’t have any before pictures, but here are some after: 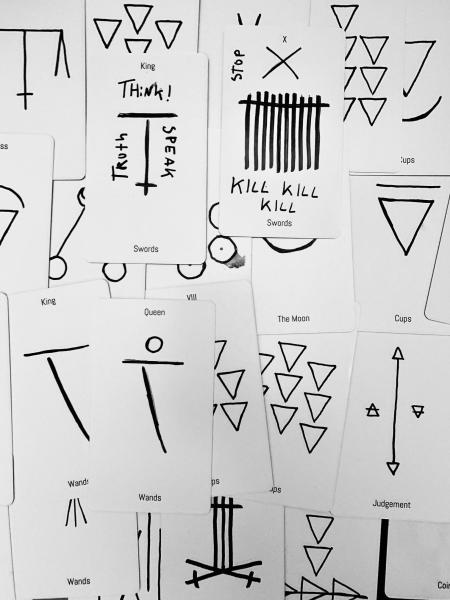 This is still very much a work in progress, but it’s turned into a really fun little project, and it has definitely taken on a life on its own. I’ve even started writing its own special guidebook. It’s also been given a new name, The Smart Limitation, which I’m sure you can figure out what it’s an anagram of. I’ll keep you updated about the progress.

Anyway, the reason I’m sharing this is because I think other people might want to start remixing their own decks. It’s a really rewarding experience, and it’s a great way of learning more about the tarot, but also to break some of its limitations.

Here’s some minimalistic decks to choose from:

The Minimalist Tarot. This is the one I’ve used. First edition is sold out, but there’s an preorder for an upcoming second edition. It’s supposed to have some revisions, but I don’t know what they are.

The Dreslyn Tarot. This one is cool, but it’s rather expensive, so maybe not the best economical choice.

The Tarot. Is that its name? I think so… I just found it after quick search, but it looks like it could work very well. It claims to be the most minimalistic tarot. Trust me, it’s not. It’s intriguing though.

However, if you just want go ahead and make your own, you can buy blank decks from various places. I have one from https://www.makeplayingcards.com/design/design-your-own-tarot-cards.html Which I might turn into the second edition of my Smart Limitation deck. We’ll see.

View all posts by larssparby

One thought on “The Smart Limitation Tarot Pt.1”